Next Friday before the open Q3 earnings season gets kicked off with three of the largest banks on the planet reporting (Citi, JP Morgan, and Wells Fargo), or about 25% of the weight of the XLF, S&P Financial Select etf.  A few weeks ago I laid out my thoughts on bank earnings, the underperformance of the group, my outlook on them into year-end and detailed a bearish trade in the XLF as means to express these views (read here).

For the purpose of this post I want to focus on the price action on the week, the reasons for it and what options traders are expecting for the three names above between now and next Friday’s close.

First, bank stocks caught a slight bid midweek as the yield on the 10-year U.S. Treasury yield broke out to 5-year highs… 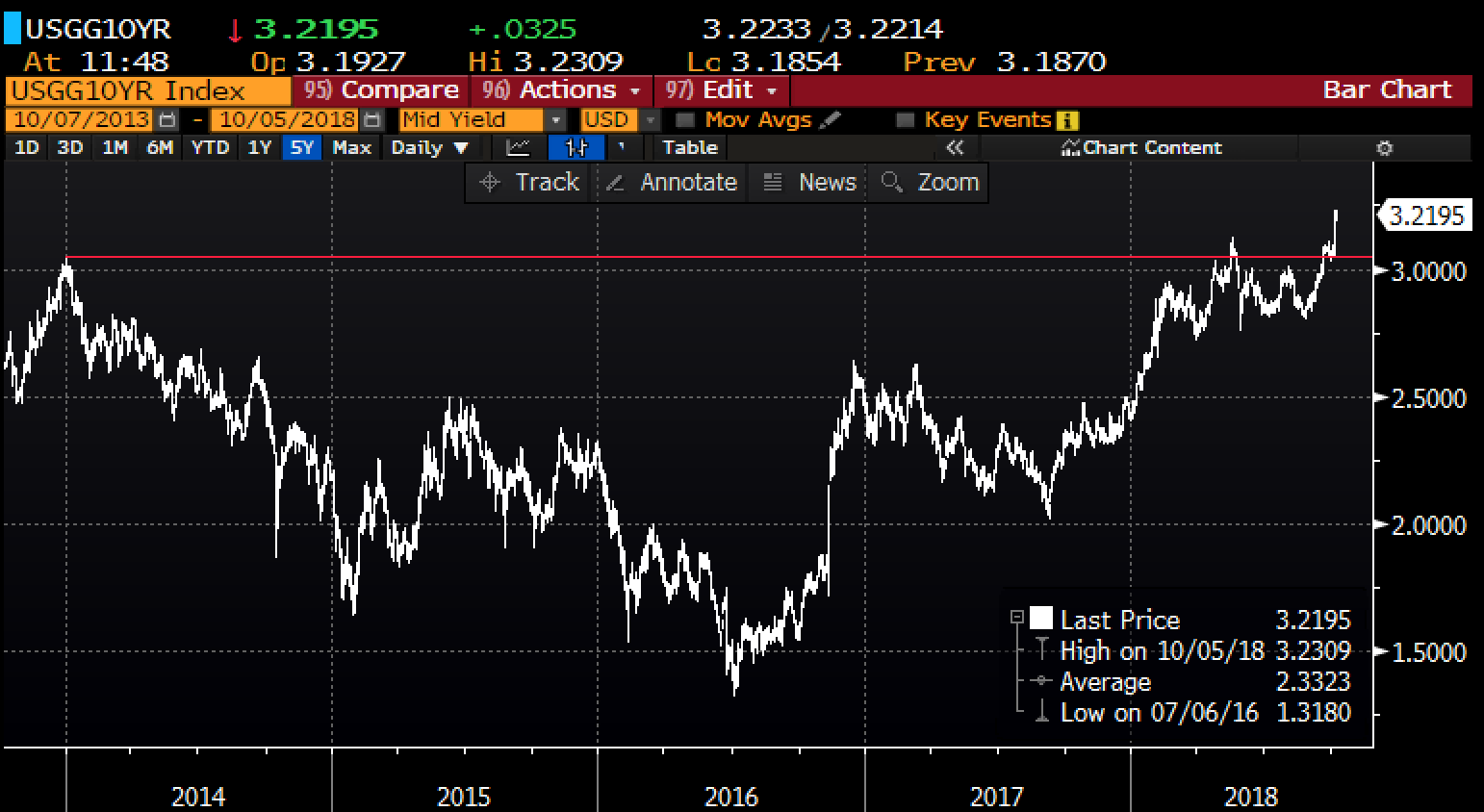 But I guess, more importantly for money-center banks, the spread between the two and ten year Treasuries started to widen out a bit as last months it seemed that the curve was set to invert…

the steepening of the spread is important for large banks like JP Morgan (JPM), Citi (C), Bank of America (BAC) and Wells Fargo (WFC) as they borrow at short-term rates (hopefully lower) and lend out at longer-term rates (hopefully higher), and the spread or the net interest margin is how that make $$$. When the curve inverts there are less likely to borrow and face massive headwinds to revenues, earnings growth and obviously profitability.

Options market makers are pricing for movement between now and next Friday’s close that is greater than the four quarter post earnings one day average:

When I look at these implied moves, and I think about investor sentiment towards these names, I am hardpressed not pick on the worst in the group, playing for a move back towards its prior 2018 lows. The stock is a mess, down 20% from its 52 week highs made in January, down 12.5% on the year, with the chart looking like a textbook head and shoulders top: 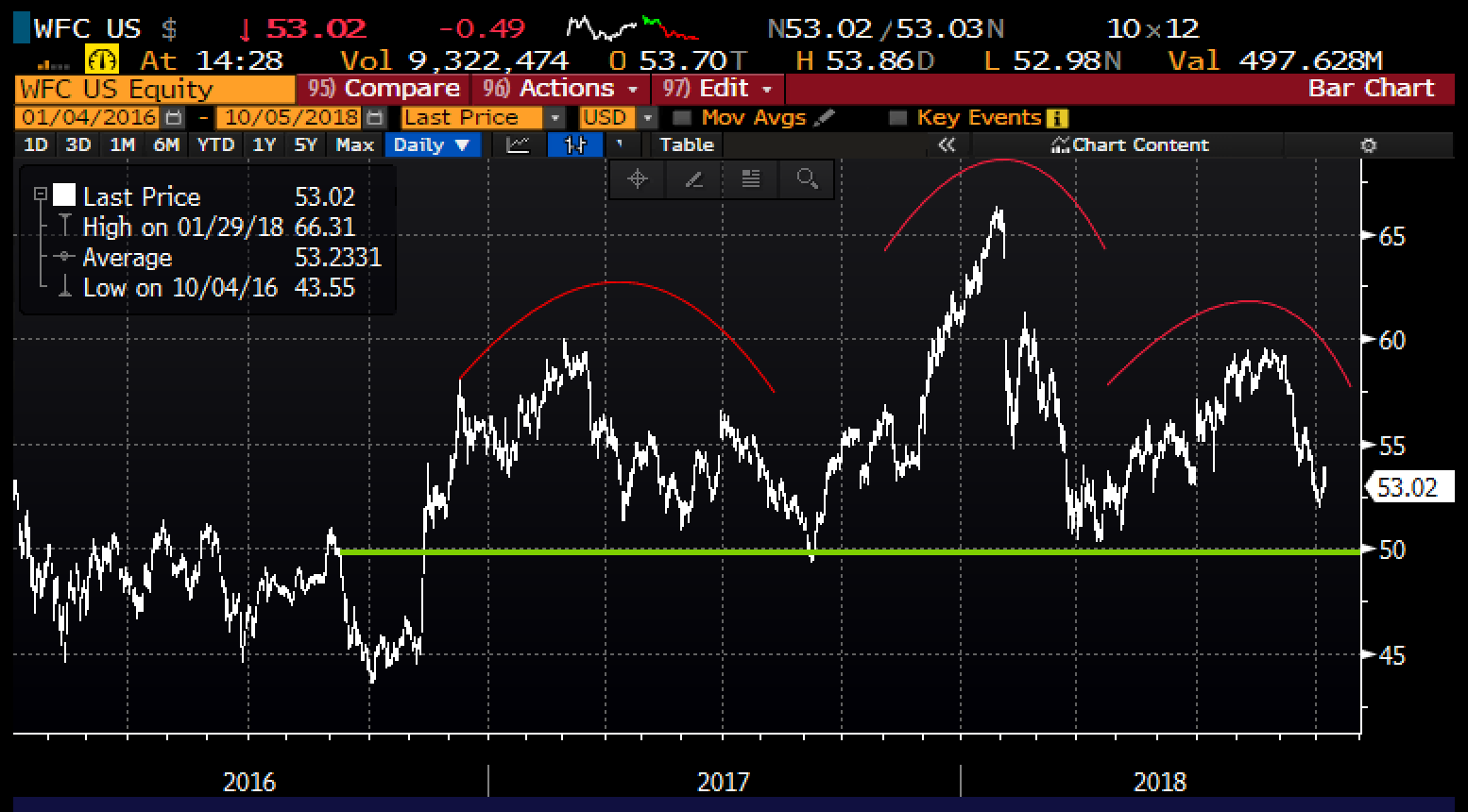 So what pick on WFC? First, it seems like these guys have yet to be able to pull themselves out of two years of scandals, per CNNMoney.com:

Beyond opening as many as3.5 million unauthorized bank and credit card accounts, Wells Fargo has admitted to charging customers for mortgage fees they didn’t deserve and forcing them into car insurance they didn’t need. Some people even had their cars repossessed as a result.

More recently, Wells Fargo started refunding customers who werecharged for pet insurance and other products they didn’t fully understand. It set aside $285 million to refund foreign-exchange and wealth-management clients for incorrect pricing and fees.

And the bank discovered that some workers altered documents about business customers — a finding that reportedly sparked a Justice Department investigation. (The department declined to comment.)

Worse, in early August, Wells Fargo said it was “very sorry” for a computer glitch that caused hundreds of people to have their homes foreclosed on.

From a macro perspective, I suspect rates likely consolidate a bit, and the spread between the two and tens does not get much steeper.

As it relates specifically to WFC, despite the regulatory overhang, analysts are looking for higher eps growth for WFC in 2019 at 18% year over year on a 2% sales decline vs Citi and BAC both expected to grow at 14% yoy eps growth on a 3% sales increase for both. I guess the real disconnect for me is that WFC trades at a premium at 1.43x book value vs C at 1x and BAC at 1.23x.

Oh and given regulators focus on WFC, and what might be an upcoming slowdown in consumer lending, that is if the performance of auto and housing stocks in 2018 are any indication, WFC could be about to be repriced.

So what’s the trade? Play for a move into and out of earnings back to support at $50 over the next two weeks…

Rationale: sentiment is obviously very poor in the stock, and it could be a tough press on the short side, but this trade offers and attractive risk-reward for those who think the company could miss and guide lower, risking about 1.5% to possibly make close to 5% in the next two weeks if the stock were to retrace back to technical support at $50.