Next week the Federal Reserve will meet on September 26th where they are widely expected to raise Fed Funds to a range of 2 – 2.25%, followed by a decent likelihood of one more rate increase at their mid-December meeting. At the start of 2018 many bond traders and economists expected three rate hikes this year and three next, but Fed Fund Futures are only pricing about a 20% chance of the effective Fed Funds rate above 3% in December of 2019:

One reason for a more muted approach to higher rates is the potential for a cooling in the U.S. economy in 2019 after 2018 was marked by the sugar high of the tax cuts in late 2017 that are likely to face difficult comparisons on the data front with the backdrop of slowing global growth.

It seems like all at once, with the spread between two and ten-year treasuries at its tightest (25 basis points) since pre-financial crisis, generally reflective of the surge of the two treasury at levels not seen since 2007 as the ten year treasury approaches 5-year resistance just above 3%, we might have seen expectations for faster near-term growth get a little over exuberant. Especially when you consider the backdrop of a growing trade spat with allies like Canada and Europe and political and economic adversaries like China having the potential to put the nail in the coffin of the economic recovery since the crisis that is aging into one of the longest over the last century. Oh and let’s not forget how the mid-term election results might cause investors, and ultimately the Fed to take a slightly more dovish tone on rates tone depending on the outcome.

The 20-year Treasury etf, the TLT has had a fairly precipitous drop over the last month, down about 4% since August 24th, yesterday bouncing off of its 52-week lows: 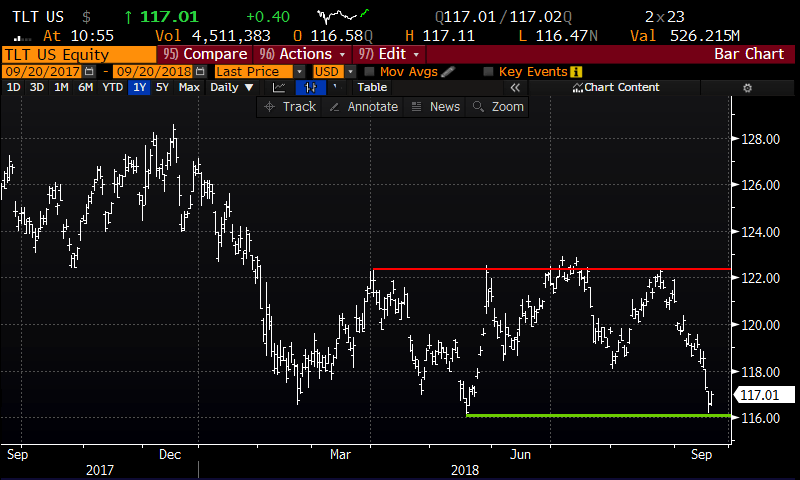 From purely a technical standpoint the TLT might set up as a decent bounce candidate as sentiment might have gotten overly bearish with rumors that the Chinese have been selling U.S. Treasuries as one of the levers they have to pull in our brewing trade war and as investors see signs of mild stoking of inflation in areas of the economy not seen in a while.

But it’s hard to look at the five-year chart and not see a descending triangle that seems destined to break below support near $116, but possibly not before another bounce to the downtrend: 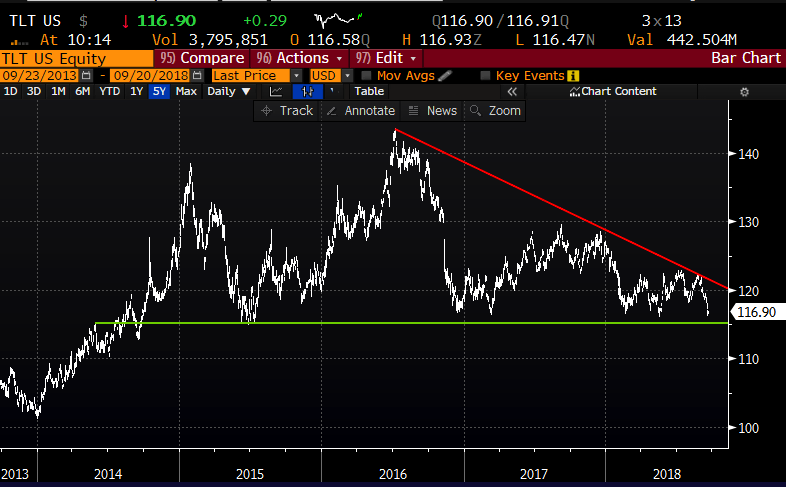 Which, for those considering a contrarian trade into next week’s Fed meeting that the Fed will raise but offer more dovish commentary about the potential for a hike in Dec, and possibly fewer than the three expected in 2019 it makes sense to define one’s risk. Thirty-day at the money implied volatility in the TLT has picked up a tad at 9.3%, up from its recent low near 8%, but down from its 52-week high in February of 16.4%, the last time rates saw a sharp rise.

This is some cheap vol for those looking to make a near-term directional bet on long-term rates.

For instance, if you thought the TLT could re-test the recent high over the next couple months you might consider call spreads in November expiration that will catch the next two Fed meetings:

Rationale: This trade risks about 1% of the stock price for a very near the money break-even with the etf very near important technical support at what might be a sentiment inflection point into a couple pivotal events.