Last Friday on CNBC’s Options Action my co-panelist Carter Worth made the case for a near term rally in U.S. Treasury bonds .

I am not going to revisit Carter’s entire technical thesis, but his main point is that the 10 year Treasury yield is likely to have a check-back to its long term downtrend before it were to bounce again, which would be back towards 2.1%… unless you are a nimble trader that may be a hard move to catch: 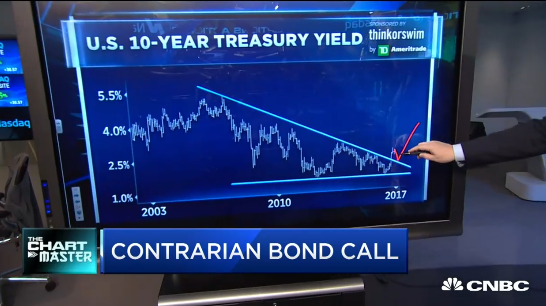 Since carter made the call Friday, yields have come in, and the trade that my other co-panelist Mike Khouw detailed in the TLT, the iShares 20 year Treasury etf has appreciated (the April 120/126 call spread for $1.70 vs a $119 close on Friday): 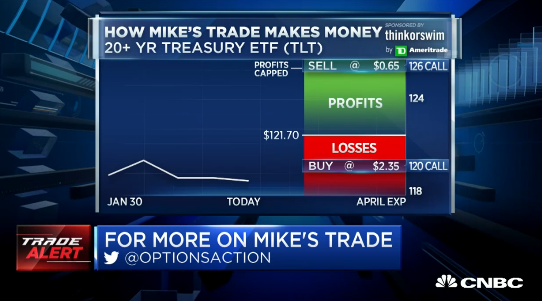 As for the trade I thought made sense as it was not overly ambitious with a break-even less than 3% of the etf price, offering about a 2.5 to 1 payout over a few months. Without some sort of massive geo-political / macro event it’s unlikely that the 10 year yield is below 2%. To my eye, the TLT has massive technical resistance at $130, the intersection of the massive gap following the presidential election and the uptrend from the beginning of 2014:

But that’s a long way from here, and trades targeting the 130 level while defining risk in case of a breakdown below 120 look attractive.